Who Is Pushing Your Buttons? 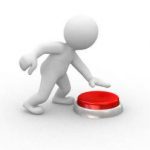 As human beings, we are complex and remarkable.  Our intellect and physicality have led us to create amazing businesses, pursue technological advances, innovate medicine and achieve physical feats that many cannot even imagine.  An integral part of all those achievements is the emotional drive that fuels our pursuits.  We are emotional beings.  How can you use those emotions to drive you in a more positive direction?

You do not have to look too far to find examples of heightened emotionality.  Emotionality is defined as the observable behavior that accompanies emotions and it demonstrates a person’s emotional reactivity.  That reactivity can be observed as laughter, tears, celebration, throwing things, yelling and cursing or emotional rants on social media, both positive and negative.

Emotionality can often be seen in competitive environments like professional sports. New York Giants wide receiver Odell Beckham Jr. has picked up a bit of a reputation as a hot head.  In a recent game, he was seen losing it on the sidelines knocking over a kicking net and getting admonished by his coach, http://www.reuters.com/article/us-nfl-giants-beckham-idUSKCN12408T. Beckham’s short fuse has been a distraction for his team and now is being exploited by the defense of teams playing the New York Giants. Yet, his fantasy football fans likely love his passion and probably cheer on his antics.  His emotionality is fueling his passion yet it is also getting in the way.  Who are you allowing to push your buttons?

According to Steven Stein, Ph.D., “Out of control emotions always work against us.” Think of Tom Cruise jumping up and down on Oprah’s couch years ago, or the scream from Howard Dean.  Once it becomes obvious that someone has difficulty controlling their emotions it is not hard to figure out how to push his or her buttons. For a variety of reasons, more and more stories are surfacing about out of control emotions. Consider the following examples:

All of these instances involve negative emotions such as anger, fear, frustration and aggression.  And all of these incidents involve adults…..adults one would think know better.  If you find yourself responding with an excess of emotion as in the above examples, ask who are you allowing to push your buttons?  It may seem to you that you have no choice in the matter, that emotionality just happens.  It happens because you give it permission in advance.

What can you do to interrupt the cycle of emotionality?

With the daily display of heightened emotionality it can feel as though it is just common place.  I encourage you not to fall victim to a dysfunctional norm. Being able to stay calm and composed in most situations will pave the way for you to experience more success, improved relationships, and feel better about how you are conducting yourself. This will enable you to use your emotions to drive your life in more positive directions. If you would like some support with this for yourself or for your team, please contact us.

Sue Kenfield specializes in transforming complex human dynamics within organizations, communities and with individuals. We empower people and organizations to maximize their success by improving leadership, communication, and emotional/behavioral intelligence skills. We elevate performance, minimize turnover and improve the bottom line through our behavioral intelligence consulting, leadership and team development, conflict management, and executive coaching programs. Sue Kenfield is also available as a speaker on the topics listed above. Contact us to learn more.

← How Strong Leadership Makes a Difference How to Strengthen Your Credibility →